From Gearhead Wiki
Jump to navigation Jump to search 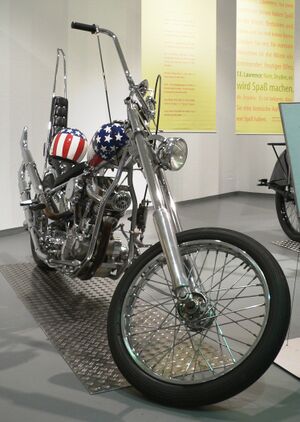 Replica of one of the choppers used in the film Easy Rider.

A chopper is a radically customized motorcycle, archetypal examples of which are the customized Harley-Davidsons seen in the 1969 film Easy Rider.

Before there were choppers, there was the Bobber, meaning a motorcycle that had been "bobbed," or relieved of excess weight by removing parts, particularly the fenders, with the intent of making it lighter and thus faster, or at least making it look better in the eyes of a rider seeking a more minimalist ride. [1] An early example of a bobber is the 1940 Indian Sport Scout "Bob-Job" which toured in the 1998 The Art of the Motorcycle exhibition. [2] Indian Scouts and Chiefs of the time came with extravagantly large, heavily valenced fenders, nearly reaching the center of the wheel on the luxurious 1941 Indian Series 441. The sun sets on the golden age of fours [3] while racing bikes had tiny fenders or none at all. The large and well-appointed bikes exemplified the "dresser" [4] motorcycle aesthetic and providing a counterpoint to the minimalist bobber, and cafe racers. Choppers would grow into and explore the dimensions of the space between the stripped-down bobbers and weighed-down dressers.

In the post-World War II United States, servicemen returning home from the war started removing all parts deemed too big, heavy, ugly or not absolutely essential to the basic function of the motorcycle, such as fenders, turn indicators, and even front brakes. The large, spring-suspended saddles were also removed in order to sit as low as possible on the motorcycle's frame. These machines were lightened to improve performance for dirt-track racing and mud racing. [5] [6]

Forward-mounted foot pegs replaced the standard large 'floorboard' foot rests. Also, the standard larger front tire, headlight and fuel tank were replaced with much smaller ones. Many choppers were painted preferably all in either flat black or in shiny metallic “metal flake” colors. Also common were many chromed parts (either one-off fabricated replacements or manually chromed stock parts). According to the taste and purse of the owner, “chop shops” would build high handle bars, or later “Big Daddy” Roth Wild Child’s designed stretched, narrowed, and raked front forks. Shops also custom built exhaust pipes and many of the “after market kits“ followed in the late 1960s into the 1970s. Laws required (and in many locales still do) a retention fixture for the passenger, so vertical backrests called sissy bars were a popular installation, often sticking up higher than the rider's head.

While the decreased weight and lower seat position improved handling and performance, the main reason to build such a chopper was to show off and provoke others by riding a machine that was stripped and almost nude compared to the softer-styled stock Harley-Davidsons, let alone the oversized automobiles of that time.

In the United States servicemen returning from World War II were looking for a thrill. Many veterans had been trained to work on automobiles and motorcycles and were looking to add a little excitement to their post-war lives with their newly acquired mechanical skills. Motorcycles and Hot Rods were the perfect hobby for them. Motorcyclists bought up surplus military bikes and removed all the unnecessary parts like windshields and saddlebags to minimise weight. Rear fenders were "bobbed" or shortened just enough to handle a passenger and keep the rain and mud coming off the rear, and sometimes removed the mirrors, or replaced them with tiny ones, such as the type used by dentists in their work.

This type of home customization led to the rise of the "bobber". Then in the 60s, motorcyclists found that a longer front end allowed the bike to run smoother at faster speeds. The degree of neck rake and length of front end was modified on these bikes with this in mind. The Girder and Springer front ends were the most popular forks for extending in this fashion, although this does make the bike harder to handle at slower speeds. Nevertheless, some choppers have extremely long forks; as one biker said, "You couldn't turn very good but you sure looked good doing it." [7]

To build or chop a traditional chopper an unmodified factory bike is used (usually a rigid Harley Davidson) and everything unnecessary to either move or stop is stripped or chopped off. Then the engine and transmission are removed and the frame is cut up and welded back together to make it lower and lighter. Performance parts are added or modified to increase speed.

Choppers have enjoyed a large following. Companies like Jesse G. James' West Coast Choppers have been successful in producing expensive traditional chopper-style bikes and a wide range of chopper-themed brands of merchandise such as clothing, automobile accessories and stickers.

A distinction should be noted between true chopper (or chopper-style) motorcycles, and custom motorcycles, or 'custom cruisers'. Despite the name, a large percentage of the motorcycles produced by popular companies such as Orange County Choppers, Indian Larry, Falcon Motorcycles, Warlock Motorcycles, and Von Dutch Kustom Cycles are better described as 'custom' bikes rather than choppers.

A distinction should also be made between choppers and bobbers. While both tried to improve performance by removing any part that did not make the motorcycle perform better, they differed in an important way: bobbers kept the original factory frame, while choppers have a modified form of the factory frame.

While people assume that the chopper style motorcycles were built purely for aesthetics, there is a real performance advantage to the raked front end on these choppers. These motorcycles have a much more stable feel at high speeds and in a straight line than motorcycles with original factory front suspensions. However, like any other modification, there is a downside: the raked front end feels heavier and less responsive at slow speeds or in curves and turns. This is due to the longer trail measurement associated with increased rake.

Changing the rake and trail of a motorcycle design requires modification of the design itself. This is a job that requires in-depth input from a motorcycle designer who is experienced with such design changes. A triple tree can be raked, or designed so the lower tree sticks out further than the upper tree, thus increasing the rake of the forks in relation to the steering head rake. What this does, is position the axle closer to the frame rake measurement line, or shortening the trail. Thus, when adding raked trees to a raked frame (which sports a longer trail), the trail is shortened to a more manageable level. Adding raked trees to a frame with short rake and trail can be hazardous, as shortening an already short trail measurement can lead to an unstable situation as speed increases.

Despite the personalized nature of choppers, and the wide availability of alternative designs, chopper builders have overwhelmingly chosen fat rear tires, a rigid-looking frame (even for a softail), and an original or replica air-cooled, pushrod v-twin engine. In the UK, due to the cost and lack of availability of the v-twin engine, many chose to use British engines from bikes such as Triumph or BSA; lately as availability has increased, Japanese engines have seen more use. Some people feel that the variety of engines and other components used more recently (especially on bikes built outside of the US) is diluting the signature appearance of the chopper style. Modern bobber builders tend to distinguish themselves from chopper builders with bikes styled before the chopper era. Modern bobber builder Jan Bachleda in Colorado builds custom choppers and bobbers using Triumph engines and frames from the 1970s and earlier. The look, though chopped, is distinctly modern and low. Today's custom choppers are usually seen as center pieces at bike night events around the United States. [8]

The United States of America, where most custom choppers reside, is one of the few countries in the world that allow custom-built choppers to be licensed for highway use. Many of these types of choppers are regarded as dangerous to operate and don't follow basic design geometry and lack many safety features in their construction.

Whereas the original bobbers and choppers were mostly home built on a budget, the modern development of the chopper tends to be shop built and very expensive. It differs from what has gone before in the technology employed in frame construction and the use of billet aluminium parts including headlights, foot and hand controls. Almost all 'Longbikes' have 'Big Inch' aftermarket or current Harley Davidson motors. Paint work styles tend to favour ghostly air brushing techniques and the Longbikes are almost exclusively solo.

However the home built Bobber, Old School and Classic choppers are enjoying a comeback around the world and in Australia.

Many choppers built in the 1970s are being brought out of retirement and appearing again on the streets. Older bikes from this period—Honda CB750/4s, Yamaha XS 650s and Triumphs 750s and 650s—are being purchased and chopped like they were in the past. Because of their reliability, modern Japanese and British cruisers are also getting chopped, though this is more difficult because of Australia's restrictive regulations on modern machines. Australian home builders include individuals in middle age who built a chopper in the 1970s and 1980s, and younger people who have been inspired to recreate a unique period of Australian motorcycle history.

In most Australian states, Australian Design Rules limit frame modifications (engineer's certificate required), and fork extension (6"). The most restrictive rule is one that allows a maximum distance of 550 mm from the front axle horizontally back to the steering head. Noise restrictions and handlebar dimensions are also regulated. In some states ADRs do not apply to pre-1977 motorcycles, so some of the older more radical choppers are still seen on Australian roads.