From Gearhead Wiki
Jump to navigation Jump to search

A car is a road vehicle used to carry passengers. It is also called an automobile, which comes from the Greek word "auto" and the French word "mobile". This name means "self-moving", as cars do not need horses or other external sources of power to move. Cars usually have four wheels and get their power from a motor. Millions of cars were made during the 20th century.

Like other vehicles, cars are made in different shapes and sizes, for people with different needs. Some small "city" cars carry only two to four people, with only small space for luggage. Other types are able to carry many passengers or heavy loads. For example, station wagons or estate cars carry from 5 to 9 people, or fewer people with lots of luggage. There are many different sizes of vans, such as minivans, which are made for families, and even small pickup trucks, which are car-like vehicles made for carrying medium-sized loads; for example, goods for delivery or plumber's and builder's tools and materials. Heavy lorries are used to carry deliveries and heavy loads.

In order for a car to work, it must have a power source, where the car gets the energy it needs to turn the wheels. Most cars use some kind of fuel to make an internal combustion engine run. The power from the engine then goes to the wheels through a transmission, which has a set of gears that makes the car go faster or slower. The most common fuel in small to medium-size cars is petrol, which is called gasoline in America (people just call it "gas" though). Some cars burn diesel fuel, which is used in big trucks and buses, and a few use wood gas. In some countries, such as Brazil and Sweden, a mixture of ethanol and petrol, called gasohol in Brazil and E-85 in Sweden, is used as automobile fuel. There are cars designed to run on more than one type of fuel - these are called "flex-fuel" and are very rare.

All of these types of fuel are called fossil fuels because they come from fossils that were made millions of years ago. Over time, they turn into oil, which is then drilled up from deep inside the Earth, and then turned into fuel by chemical changes. Burning fuel in an engine produces air pollution, which can make people ill and causes global warming. 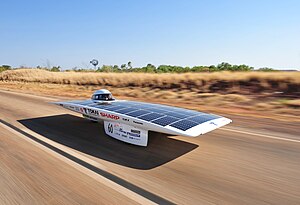 To solve these problems, scientists and engineers invented alternative fuel vehicles, which use fuels that are less common, but are renewable and will never run out. They include propane, natural gas, compressed air, and ethanol (which comes from plants). The cleanest cars are electric vehicles. They usually store electricity in a battery (as in the Nissan Leaf), but may generate it from hydrogen fuel cells (like the Honda Clarity). The electricity then drives an electric motor instead of an engine, which then turns the wheels. These cars are much quieter than other cars and do not give out any polluting exhaust gasses (although some ecologists say that most of the hydrogen that people use comes from burning fossil fuels). Cars that use batteries can be recharged in different ways, usually from a power outlet, but some even use solar cells. There is a competition every year where people try to design a car that can last the longest and go the farthest on solar energy alone.

There is also a type of car that uses both an internal combustion engine and an electric motor. This is called a hybrid electric vehicle and an example is the Toyota Prius. 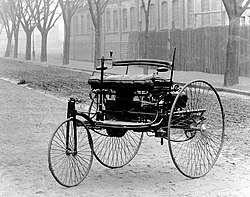 The earliest automobiles recorded were actually steam engines attached to wagons in the late 18th century. The steam engines were heavy and therefore the wagon was slow and hard to control. Better and faster steam cars became common late in the 19th century.

Some cars in the early 20th century were powered by electricity. They were slow and heavy and went out of use until the idea came back later in the century.

The internal combustion engine changed the way automobiles were powered. The engine used either gasoline, diesel, or kerosene to work. When the gas is exploded in a cylinder it pushes the piston down and turns the wheel.

Although many people tried to make a good car that would work well and sell well, people say that Karl Benz invented the modern automobile. He used a four-stroke type of internal combustion engine to power his Benz Patent-Motorwagen. In 1886. He began to make many cars in a factory and sell them in Germany in 1888.

In North America, the first modern car was made by the Duryea Brothers in Springfield, Massachusetts. The Duryea Brothers' car also won the first-ever car race in 1895, competing against cars made by Benz. The race was in Chicago, Illinois, and 53 miles long. Duryea then began making the first automobiles for everyday people to use in 1896. That year they made 13 cars by hand in Springfield, Massachusetts. 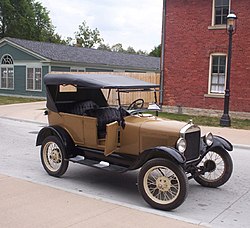 Benz may have invented the first modern car, and Duryea the first car to sell, but Henry Ford sold the most cars to the most people. In 1910 he began making and selling his Model T, which was a huge success. Many people could afford this car, not just the rich, because Ford used mass production. This meant he made a great many Model Ts in a short time in a factory. People say that the Model T is the car that "put America on wheels". The Model T was the most popular car of the time because it was cheap but it was still a good quality car that ordinary people could own.

Since then, many different kinds of cars have been designed and built, from minivans to sports cars.

In the 1950s the United States made and used more cars than all the rest of the world. The world caught up, and fifty years later China became the largest maker and user.

Cars are faster than walking or riding a bike if you are going a long way. They can carry more than one person and a large amount of luggage. Depending on local public transport quality, they can also be faster and far more convenient than using buses, bicycles or trains, and can often go where public transport cannot. 4-wheel drive "off road" vehicles are particularly good at reaching places difficult for other wheeled transport due to bad roads or harsh terrain. They cost more and burn more fuel, and there are many places even they cannot go.

Most cars enclose people and cargo in a steel cage, (having a roof, doors and windows), thus giving protection from weather. Modern cars give further protection in case of road accident, as they have added safety features such as seat belts, airbags, crumple zones and side-impact protection that would be expensive or impossible on two-wheeled or light 3-wheeled vehicles, or most buses. 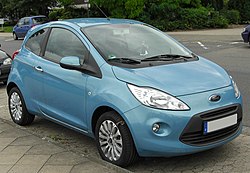 The Ford Ka, a small city car which is not sold in the United States

Buying and running a car needs a lot of money, even more for a good quality one that is not too old. There are things to pay for - the car itself, fuel, parts (for example, tires/tyres), maintenance, repairs, insurance to cover the cost of crashes or theft, parking charges, and toll roads and any tax or licensing fees charged by government.

When cars crash they can be damaged and hurt people, and life of a person is more important. When too many cars try to go the same way, traffic congestion slows them all. They can cause air pollution if too many are used in a small area like a city, and the combined pollution of the world's cars is partly to blame for climate change. Many places where people live close together have public transportation (or mass transit) such as buses, trains, trams and subways. These can help people go more quickly and cheaply than by car when traffic jams are a problem. Some of these problems can be made smaller, for example by carpooling, which is putting many people together in one car.

Traffic congestion and accidents can be dangerous to other road users, for example people riding bicycles or walking, especially in an old town built when cars were few. Some 20th century towns are designed for cars as the main transport. This can cause other problems, such as even more pollution and traffic, as everyone has to drive. Communities are divided up and separated with big roads. Pedestrians are in danger where there are too few foot bridges, small road bridges or other crossings.